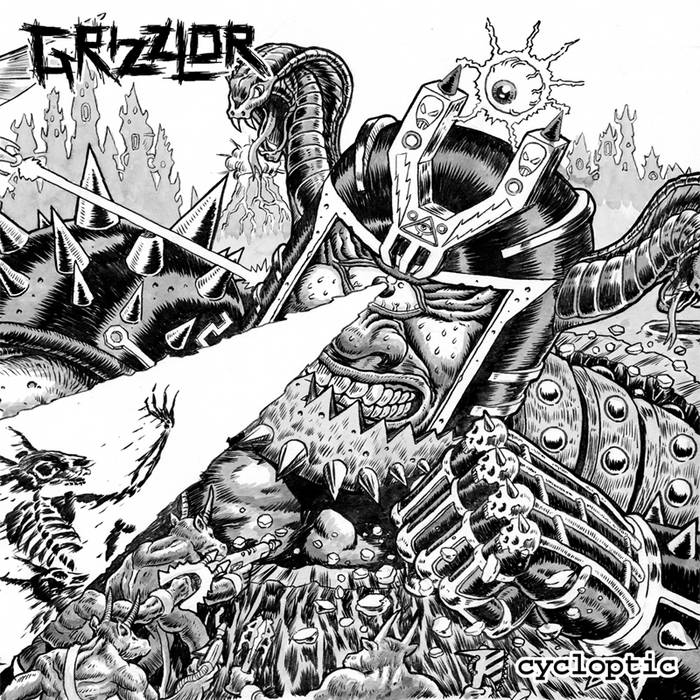 Connor Ingram This cover does not lie. That is exactly what the music sounds like. Favorite track: SUNDAYS ARE STUPID.

"No room. This noise-punk record packs a couple hours of inventive, oddball ideas into about 10 minutes, and they have a song called 'Sundays Are Stupid', so it's really goddamn great."

"Noise rock riffage riding a mastodon through a swamp."

"On this new release they boil down each song to its essence of fuzzed out angular riffs, pummeling bass and pounding drums. No song goes over the two minute mark. Grizzlor uses this brevity to their advantage... Grizzlor has stepped up to the plate and delivered one killer slab of noise rock on this release. Here’s hoping it raises their profile significantly, not only in the noise rock community, but also in the larger, national, loud rock scene. It deserves your attention."

"It’s nice to see a band that’s clearly catering to no one, just wearing the clothes they own and not thinking twice about it, naming their band after a He-Man character and not worrying that it might not impress you. That comes through their music too, which plays out like a young and rowdy take on Helmet and Unsane – Grizzlor certainly don’t have the guitar rigs to match, but they’ve got the feistiness that any band who is used to playing to more than fifty people a night has surely lost. There are seven songs on this 7″, and to be perfectly candid, I’d happily accept seven more."

"Man, Hex Records does it again. Grizzlor is a slow, heavy band with loud, plodding drums and huge guitar riffs. They're definitely influenced by AmRep stuff of the '90s. The singer has a growling, shouting, ranting delivery. They belt out tongue-in-cheek screeds about bitterness and being a loser, with occasional diversions into insight. I like 'War Machine', where he rants about smart phones. Trust me, it's all in the delivery. I know The Melvins and Killdozer are pretty much untouchable, but the former take themselves far too seriously these days and the latter are no more. So give Grizzlor a shot."

"As declared at the end of 'Winter Blows' this album is downright relentless. I would recommend this band to everybody that I know but especially those that like to crush some beer and forget about all of the dumb shit that is happening in the world while blasting crunchy space tunes at maximum volume."

"Ever wondered what the Melvins would sound like if they were three times faster with a tenth of the attention span? New Haven trio, Grizzlor, are here to provide the answer... Each track is a barrage of filthy, lumbering Flipper-style bass lines and riffs that sound like Clutch on downers. Effected vocals and pitched down samples sit on top of this to add an acid-fried weirdness to proceedings, echoing crazy Texans, Butthole Surfers."

"While the mythical creature this EP is named after may have had singular vision, the singular vision of Grizzlor on these tracks is to smack you right in the mouth and steal your beer and weed in the process. Grizzlor pull no punches. Their blend of noise rock with elements of everything from sludge to grunge is potent in both its attack and the impression it leaves. Tracks like “Tommy” and album-opener “Sundays Are Stupid” seem to brand themselves to that dark part of the human psyche that craves the animalistic destruction of all things pure and innocent."

"[Cycloptic] seems to be an EP centered around minor complaints/annoyances like the weather and how much everyone hates Sundays. I don’t necessarily hate [Sundays], but I do find them to be rather boring… which makes the song “Sundays are Stupid” kind of impressive in a way, in that they could muster up such an amount of aggression over a day that is likely the most mundane of the week. Kudos, guys."

"The 7 track 7” EP is sonic irresistibility as intoxicating as it is bruising and ravenously intrusive. This time around Grizzlor have not so much polished but stripped down their sludgy, hardcore trespass to its textured bones which in turn has fanned the fires of spiteful imagination and searing diversity. The result is something glorious, with Grizzlor now not so much one of our favourite propositions of the past twelve months since they first nudged our personal attention, but of punk/rock as a whole."

"...this album – and in fact Grizzlor’s entire catalog – reads like a laundry list of the things they revile. Lazy Sundays, visits with Grandma, cold weather – anything is fair game! And while the vocals are processed and buried to such an extent that lyrics are often indiscernible, Grizzlor’s whole sound never fails to exude a perpetual attitude of sickened disapproval."

"...the third release for Grizzlor, who have never engraved as many tunes on the same record and, at the same time, have never done one as short. The record is filled all the way to the mouth with seven pieces that never venture beyond two minutes. The faster it is, the more treacherous it is. The trio from New Haven strike into the hard and the crushing, making their rhythms heavier, and simplifying the animal soul that has been animating them since their debut."

"...Cycloptic – is a violent blast from start to finish. Unapologetic in tone and nature, these guys blast their way through a ton of heavy grizzled sludge vibes... Fast paced riffs all delivered under 2 mins, which allows the band to show off their musical skills. Yeah it's down-right ugly at times, but you can't deny how catchy their songs can be..."

-Steve Howe, Outlaws of the Sun

"Lot of noise, lot of fuckall, not too many songs... most of which hover on either side of 90 seconds apiece... Dissonance, grit and tension pervade the offering front to back. If Grizzlor are playing in the basement, somebody’s gonna call the cops."