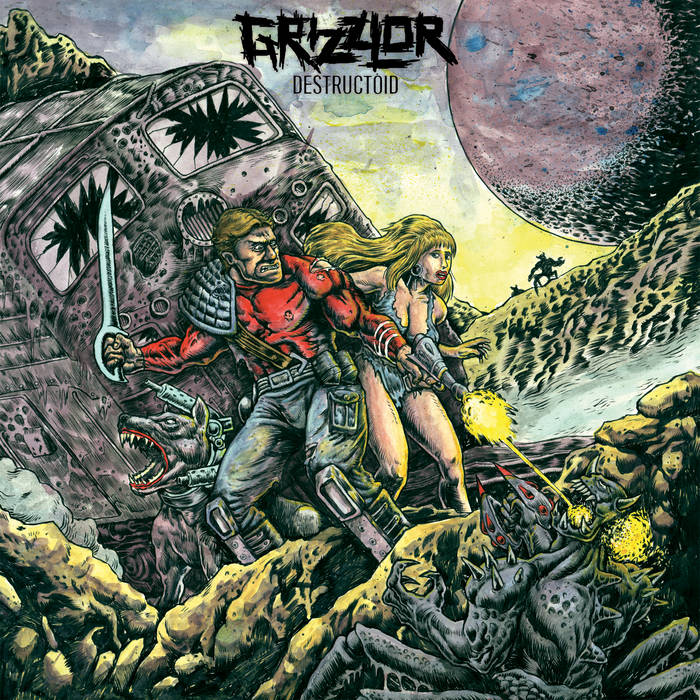 The Mad Professor Fuck you guys slay it! If you ever tour Australia please have Batpiss as support........ and why not bring Pigs while you’re at it!

And don’t play me the intro as your answer please😏

"...they have finally taken the full length dive with this release. It was worth the wait, because Destructoid shows the band firing on all cylinders, delivering a slamming platter of noise rock that is heavy, pounding and filled to the brim with the misanthropic rants of guitarist/vocalist Victor Dowgiallo... Destructoid is easily one of the best records to come out of Connecticut this year, but more importantly, it’s one of the best noise rock records to come out in the world outside of the Nutmeg State. The band has really stepped up their game on their full length debut, creating one vital slice of noise punk. This will take a lot of people by surprise. Don’t miss out on this one."

"“Connecticut” and “metal” usually go about as well together as Jews and K.K. Warslut, but in Grizzlor we may have found the exception to the rule as the New Haven outfit delivers a bruising blend of noise rock and sludge on their new album Destructoid, out now. Micro-label Hex Records released the effort, but I wouldn’t be surprised if they graduate to the big leagues soon enough."

"Their unique brand of lurid, sludgy weirdness is perhaps more potent than ever. Coming across like the Melvins providing a twisted soundtrack to Saturday morning kid’s cartoons, "Destructoid" is a barrage of sharp angular riffs, aggressively pummeled rhythms and vocals spat through a wall of misanthropic fuzz"

"And there it is, a three-man avalanche of discordance and sonic hellfire pummeling me before I even know what hit. Anyone get the plate number on that fiery truck that just ran me over…again… At some point I’ll learn my lesson and remember to brace for impact before I put the headphones on. On second thought, probably not, because one of GRIZZLOR’s selling points is their ability to continually rattle you out of whatever mundane coma you’re riding until death decides its had enough of toying with you like a cat with a baby bunny rabbit. Just rip the fucker’s head off already and put it out of its misery. Just make sure you’ve got some GRIZZLOR on the soundtrack when it all goes down."

"‘Destructoid’, the new LP from New Haven noise trio Grizzlor, is as rough, raw and rugged as if the band were your next door neighbours, playing it unsociably loud at 2am right next to your bedroom. Full of bouncy, swaggering rhythms and a willful disregard of standard tropes, the eleven tracks couple the confrontational urgency of garage grunge with the experimentation of noise rock."

"Destructoid sounds like the soundtrack to that one time back in 1999 when Sasquatch, Beast Man from (He-Man), and the Tasmanian Devil had a coke filled booze bender in Vegas for like a solid three days with absolute zero hours of sleep. That three day escapade nearly shook poor Las Vegas and Western Society as a whole to its knees and Grizzlor’s Destructoid may very well do the same thing again once it hits the ears of the masses."

" 'Yeah, I don’t know, I mean, I got to think about it,' says the voice at the beginning of “Fruitloopville,” the opener to noise-rock band Grizzlor’s latest release and its first full-length album, Destructoid. The voice is lazy and comical, and doesn’t prepare you for the heaviness that follows. It’s a fitting introduction to the rest of Destructoid, which finds one of New Haven’s hardest bands digging further into the sound it developed three years ago — one that marries thick slabs of noise with a wicked sense of humor... Destructoid suggests that three years in, Grizzlor is just getting started."