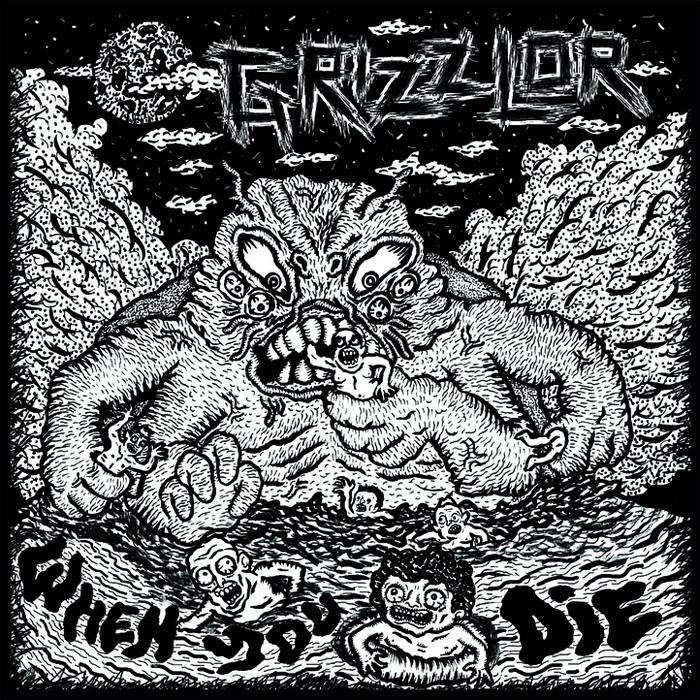 Filxx Imagine the sound of Jon Spencer on acid jamming rock with the guys from Whores. or something like that ! It's dirty, it's heavy, it's noisy, it trash-rocks and it's just fit perfectly for the time I take to smoke one... Good job boys on you're dirty space sound. Favorite track: STONED.

Professor Baillie Legends the lot of em. When you die is the perfect follow up to their other master-works.

"You're gonna need to smoke a bowl before pressing play. In fact, you may have a gun to your head. Baked sludge absurdity, power-slopping through four tracks of surfed-out stoner doom, these guys make drug-nihilism and wild-eyed crazy sound like a hell of a lot of fun. A 3-piece from Connecticut, GRIZZLOR totally slayed me with this 7", released Oct 4th on Money Fire Records. Sloppy, raw, fucking dirty, but upbeat (with more than a tinge of madness) these guys take the Eyehategod/Fistula base on a detour through trebly surf punk spazz."

“They’ve got a big, Karp-like recording, a drummer who probably listens to way more metal than hardcore, and a vocalist who provides Mike Doskocil-levels of sewage and refuses to cater to any sense of melody. I’m reminded of Pantera’s “Good Friends And A Bottle Of Pills”, not in lyrical content but musical mood.”

“Completely brutal, sludged out, noise rock masters from New Haven, Connecticut, Grizzlor, not only have an awesome band name, but fucking kill every single song that they put down on “When You Die.” Their spastic guitar style mixed with gravelly bass, punishing drumming and super abrasive vocal work make for an ear stabbing, gut punch of an EP!”

“Wasting absolutely no time, appropriately titled opener No Time is a fuzz-heavy assault, combining the Jesus Lizard’s lurking menace with a lumbering bass riff and early Mudhoney guitar spasmodics in a succinct 83 seconds.”

“There is nothing polished and arguably welcoming to When You Die yet it is one of the most gripping and inescapable joys of the year. Noise rock has a new heir to its throne and it is called Grizzlor.”

“Grizzlor have confirmed that—once again—sludge, noise rock and everything in between, go hand in hand.”

“This trio from New Haven, CT sound like a brutal beast. Their total mindlessness is in the form of these primal sludgy riffs that plow ahead with the extra low end frequency range of vinyl to rattle windows and spirits. You can't reason with these things, first you make a blood pact with the higher powers that control them and then hope the end never comes. They happen to build a really fucked up house but they know what they're doing. It's messy and dangerous but it's the thing you carry with you and know how to use - which isn't normal.”

“4 ditty's of heavy, sludgy noise that definitely sits these guys comfortably at a dinner party with newer noise like Hawks, Blacklisters, and Whores."

"There are only three dudes in Grizzlor, which is strange, because I thought this big time sound was surely made by an angry army. The band just "dropped" a super solid EP called "When You Die" on Brooklyn’s Money Fire Records (home to such fine punks as Low Fat Getting High + Vulture Shit). Does it shred? Yes. Yes, it does. Does it explain the great mystery of what happens after we die? Not really. Oh well. Can't win 'em all. But maybe they should bury me with earplugs just in case."

"This is super lame, guys."