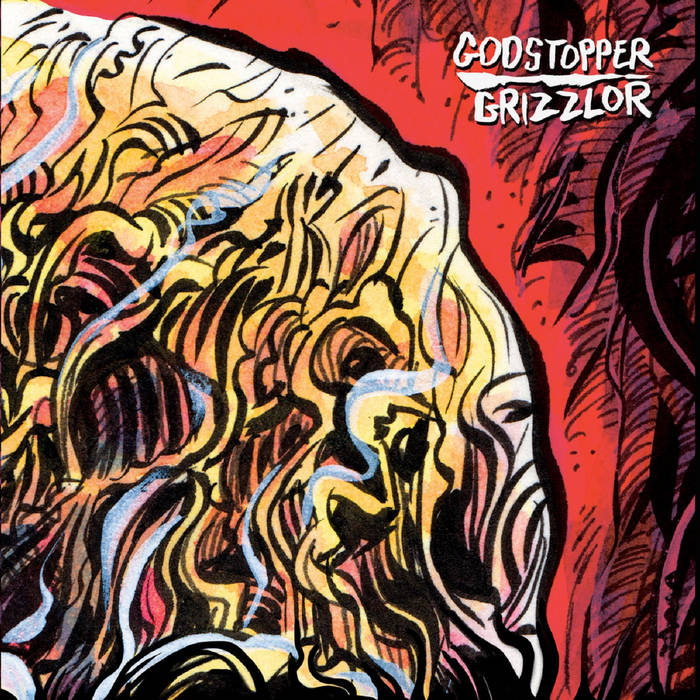 Release #2 of 4 of the split 7" series by Corpse Flower Records. Limited to 300 copies, yellow vinyl.

"New Haven, Connecticut’s Grizzlor has morphed into a more aggressive beast since the first formed about five years ago. The two songs on this record follow down the path laid out by their Cycloptic 7″ from 2015 in that they are more aggressive and in your face... Hopefully, these tracks are a harbinger of what’s to come on their debut full length album."

"Corpse Flower Records have brought together two titans of oddball noise rock in the form of Grizzlor and Godstopper to create a killer split 7". New Haven’s Grizzlor came to my attention with their mighty 2015 7” “Cycloptic”. This time the band have slowed the tempo slightly to pack two songs into seven minutes, making these tracks almost prog in length compared to their previous output. Their unique brand of lurid, sludgy weirdness is as potent as ever though coming across like the Melvins providing a twisted soundtrack to Saturday morning kid’s cartoons."

"Who doesn’t like a quick shot of weirdo noise? From the alliteration of their two names to the madcap, wackydoodle stylizations they deliver on one side, then the other, there isn’t really a level on which the GODSTOPPER and GRIZZLOR split seven-inch from Corpse Flower Records doesn’t live up to its promise. Because basically it promises weirdo noise. Each act — in this corner, GODSTOPPER on side A, from Toronto, Ontario; and in this corner, GRIZZLOR on side B, from New Haven, Connecticut — has some measure of extreme underpinning, though what they most share in common is a refusal to limit themselves to that.”

"Drop the needle and right off the bat you know you are listening to Grizzlor. Their sound is unmistakable. Never shy about flashing their love of old science fiction is what sets them apart with their take on noise rock. The two tracks they contribute on this 7” are the perfect soundtrack for your next radioactive bug smashing field trip."

"This is a bizarre hodgepodge of some of my favorite things from the 90's that got me into experimental music to begin with... As for Grizzlor, it would be a crime to discuss their side without mentioning Primus. These crunchy, off-kilter bass parts and avant-garde vocal deliveries are certainly influenced by Les Claypool and company."

"Though they (Godstopper and Grizzlor) both share a heaviness and love for rhythmic exploration, overall each band brings something different to the table... Grizzlor uses a musical template which contains the aggressively fuzzed-out funk in the vein of The Brown Album-era Primus, with incredible shred elements of Bucketheadland 2-era Buckethead and the off-kilter intensity of the Butthole Surfers."

"The record is fueled by rambunctious sounds that give a snapshot of how Grizzlor and Godstopper represent the core of their work. There are many flexible elements, and the prize is in how listeners are given the leeway to interpret them. Another point that’s guaranteed: This release will leave you frazzled by the high voltage energy that surges throughout."

"Where are all the songs about love and relationships? This is junk."